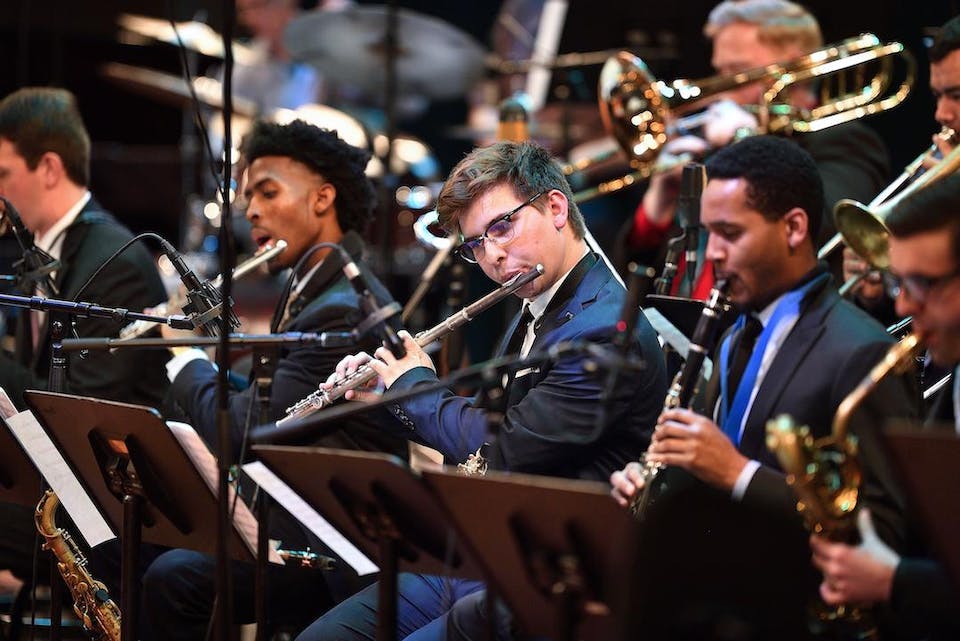 The University of North Texas One O'Clock Lab Band

Facebook
Twitter
Email
Join us at Birdland for the University of North Texas' premier jazz ensemble, the One O'Clock Lab Band!

The One O’Clock Lab Band, under the direction of Alan Baylock, is the premier performing ensemble of the internationally acclaimed University of North Texas jazz studies program. With an unprecedented seven Grammy Award® nominations (one or more per decade and under every director since the 70s: Lab ‘75, Lab ‘76, Lab ‘89, Lab ‘91, Lab 2009, Lab 2015) from the library of over eighty critically acclaimed recordings to date, the One O’Clock Lab Band is noted for exceptional individual musicianship and tight ensemble performance. Concerts feature the wealth of compositions and arrangements from the UNT jazz library written by current and former North Texas students, by director Alan Baylock, by Grammynominated composers Neil Slater, Steve Wiest, and Rich DeRosa (jazz composition faculty), the Stan Kenton, MaynardFerguson, and Bob and Darlene Curnow Jazz Libraries (all housed exclusively at North Texas), in addition to library classics and the finest contemporary writers in jazz.The One O’Clock Lab Band has toured internationally with great success over the decades, performing in Russia, Mexico, Switzerland, England, France, The Netherlands, Australia, Portugal, Finland, Norway, Canada, Italy, Germany, Japan, Hong Kong, Poland, Ireland, and Thailand, where the band performed for the King of Thailand and His Majesty chose to “sit in” with the band. The band has toured the major jazz festivals including Monterey, Cork/Guinness, Montreux (first college band to do so), Vienne, North Sea, Spoleto, Pori and Umbria. In 2010 the band attended the 52nd Grammy Awards while touring in California. The One O’Clock has performed by Presidential invitation at the White House, joined on stage by Duke Ellington and Stan Getz. The band frequently appears at major jazz venues such as Birdland (NYC), Blues Alley (DC), Catalina's (LA), and as the headliner at jazz festivals, music conferences, and concerts hosted by numerous fine arts series, colleges and high schools across the United States and around the world.