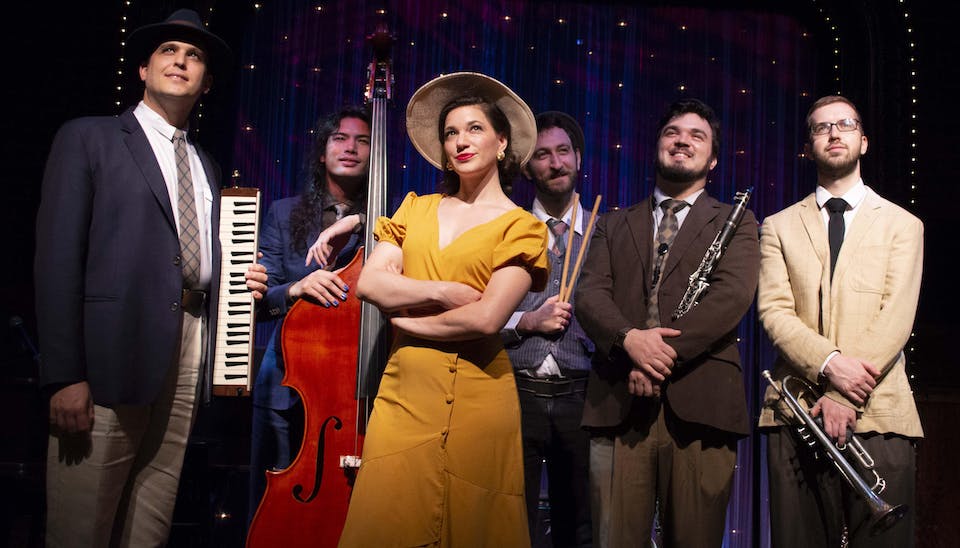 "...One of the most entertaining shows you will see." - Broadway World

Six months after their Birdland debut, The Swingaroos return to the legendary jazz club for the New York premiere of “Hollywood Serenade.” Inspired by the Golden Age of Hollywood, this vintage music revue pays tribute to such icons as Frank Sinatra, Cab Calloway, Judy Garland and Fred Astaire. Travel back in time to the ‘30s and ‘40s when big bands and swing dancing accompanied the greatest stars of the silver screen. Featuring songs like “At Last,” “The Joint is Really Jumpin’ in Carnegie Hall,” and “Hooray for Hollywood”, the sextet revives film-focused hits from the Goodman, James and Miller bands with many more “guest” appearances delivered by shapeshifting vocalist Kimberly Hawkey. The show was originally developed for Florida Studio Theatre, where The Swingaroos gave over 50 sold-out performances in 2019. Their Sophomore Birdland appearance rides on the heels of their latest album release, “Music of the Night” - a tribute to Broadway’s jazz roots.

NYC's vintage swing sextet. With 1940's-style arrangements and a splash of technicolor, The Swingaroos lend a spirited voice to the most-cherished songs and personalities of Broadway, Hollywood, and the swing-era Bandstand. Serving one surprise after another, this musical time warp overflows with hits by the Gershwins, Irving Berlin, Cole Porter, Rodgers & Hart; plus original music inspired by the greatest songwriters of the 20th century. Featuring "sizzling", award-winning vocals by Kim Hawkey and high-flying arrangements from Broadway's Assaf Gleizner, this group is "awesome in every way" (Talkin' Broadway).

More Praise for The Swingaroos:

"Over the last few years they’ve evolved into one of the music’s more dynamic, high-energy ensembles, and sparked by the indefatigable Miss Hawkey, they’re still one of the most consistently entertaining acts around."

"A treat for the eyes as well as the ears. Lots of fun." - Talkin' Broadway

“The Swingaroos will put a smile on your face” - The Observer