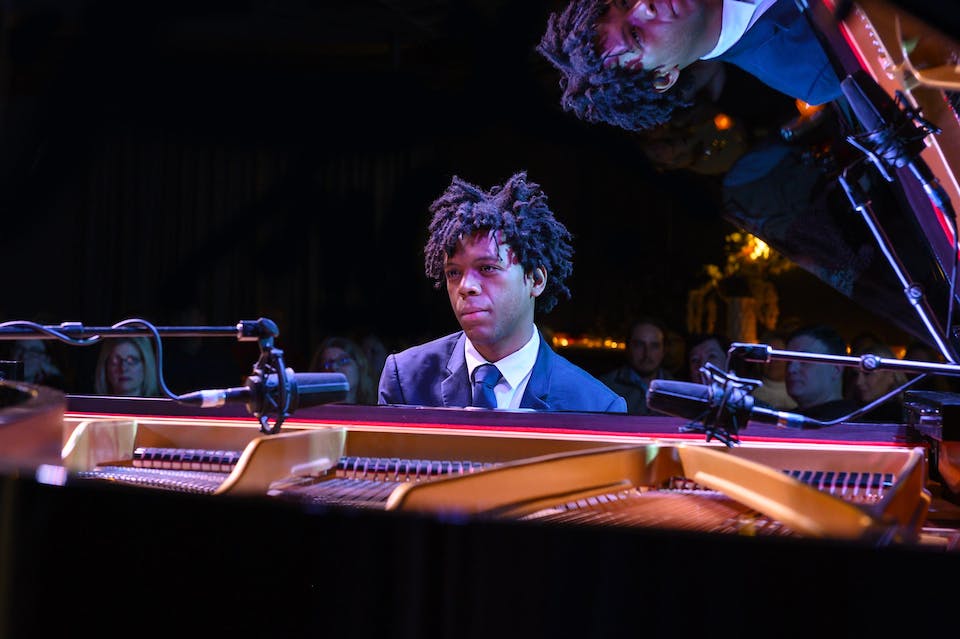 The “Sean Mason Trio” is a musical ensemble with an aesthetic similar to the jazz idiom - directly relating to current culture now. In the pursuance of expression, live performances are offered, and repertoire is presented in the form of a musical suite - chosen based on a theme, experienced by a single character.

Hailing from Charlotte, NC - Sean Mason is a blistering force in the realm of jazz piano. After winning the annual Loonis McGlohon Jazz Competition in 2014 his career shot off, as he has now toured extensively with jazz legends Branford Marsalis and Wynton Marsalis, and has played with many other jazz greats including the late Roy Hargrove, Kurt Elling, Delfeayo Marsalis, Herlin Riley, Wycliffe Gordon, Rodney Whitaker, Kenneth Whalum, Shannon Powell, and Dr. Michael White. In the film world, Sean has worked with the esteemed two-time Tony Award winning director George C. Wolfe and is the featured pianist on Netflix’s film “Ma Rainey’s Black Bottom” which features Viola Davis, Denzel Washington, and Chadwick Boseman. In addition, Sean Mason also leads his own band, The Sean Mason Trio, and he is one of the most in-demand sideman for many jazz ensembles in the greater New York City area.

As a leader, the Sean Mason Trio tours frequently around the United States and hosts a bi-weekly performance at the esteemed Smalls Jazz Clubs in New York City while also performing regularly at various New York City venues such as Dizzy’s Club - Jazz at Lincoln Center. Sean’s recent accomplishments include performing on Good Morning America with Mario Abney and The Abney Effect, headlining the Charlotte Jazz Festival as a sideman with Wynton Marsalis’ Young Jazz Lions, being the musical director of a curated project honoring the musical career of the great jazz legend Ahmad Jamal - performing four sold out shows in Charlotte, NC - and also being the featured pianist of another curated project honoring the musical career of the late great New Orleans jazz legend Danny Barker in New York City’s very own, The Appel Room - Jazz at Lincoln Center. Currently residing in New York City, Sean is a student at the prestigious Juilliard School studying jazz piano and is a continual force in the realm of jazz piano.