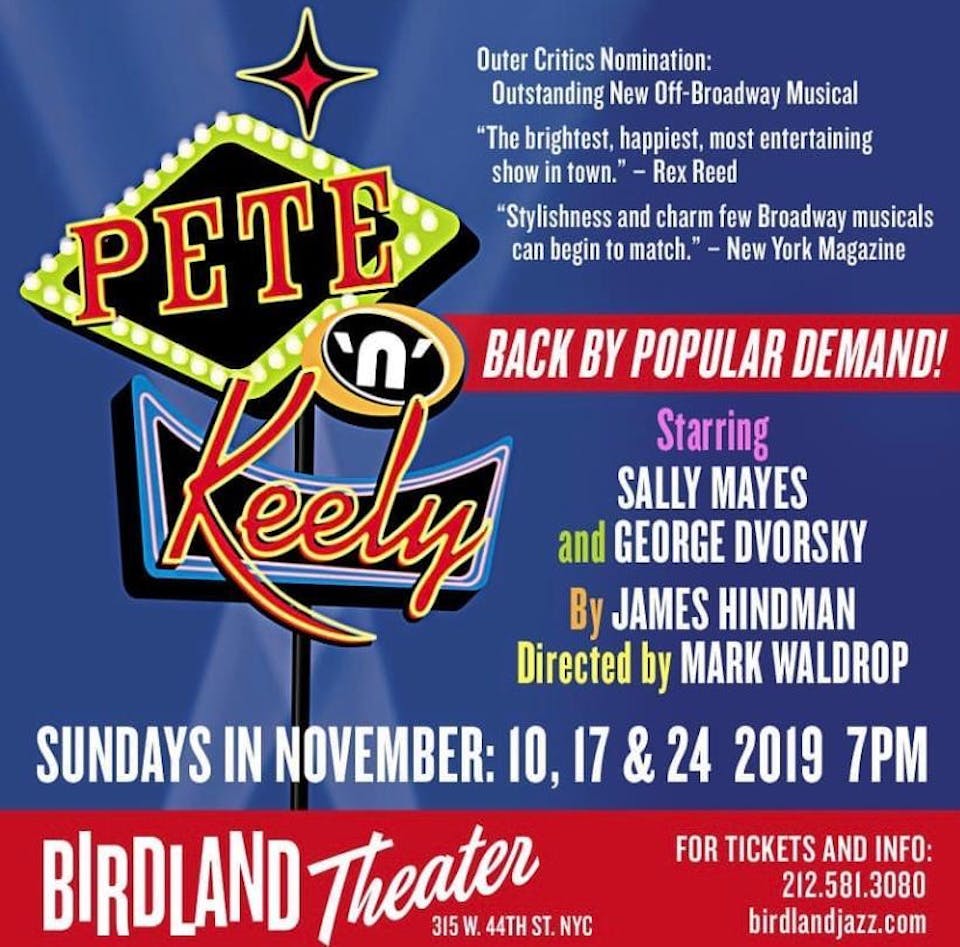 Facebook
Twitter
Email
Join us at The Birdland Theater for The Return of Pete 'n' Keely! Sundays, November 10, 17 and 24, with shows at 7pm.

Birdland Theater is proud to announce that Pete Bartel and Keely Stevens, America’s Swingin’ Sweethearts, reunite for a 1968 live TV special recounting the showbiz roller coaster ride that got them where they are today...divorced! The fictional duo will reunite on the Birdland Theater stage Sundays, November 10, 17 and 24, with shows at 7pm.

George Dvorsky and Sally Mayes recreate their starring roles in the off-Broadway hit - Pete ‘n’ Keely! Written by James Hindman and directed by Mark Waldrop, the show features unforgettable, period-perfect musical arrangements by Patrick Brady. The kick-ass band, under the direction of Joe Baker, will feature Bob Renino on bass and serve up hits like “Besame Mucho,” “Lover,” “But Beautiful, “This Could Be the Start of Something Big,” “Fever” and many, many more. The audience is invited to laugh out loud as the stars serve up their “official” show- biz saga. But there’s another story unfolding between the lines. Pete and Keely have some unfinished business, and the tension bubbling beneath the show’s glitzy surface threatens to boil over at any moment in a confrontation that will not be ready for prime time. History repeats itself, live and in living color, as Pete and Keely careen towards a conclusion that’s at once uproariously funny and surprisingly touching.

Sally Mayes made her Broadway debut in Cy Coleman’s Welcome To The Club. Her performance won critical praise along with a Theater World Award and Outer Critics Circle nomination as one of Broadway's Outstanding Newcomers. On Broadway, Sally is perhaps best known for her performance in the Roundabout Theater revival of She Loves Me, for which she won Tony, Drama Desk and Outer Critics Circle nominations. Sally appeared as Aunt Corene in Urban Cowboy (Drama Desk nomination). She drew raves as Mae West in the National Tour of Dirty Blonde and also appeared in the Broadway revival of Steel Magnolias. Sally starred in several Off-Broadway productions including Closer Than Ever (Outer Critics Circle nomination), Das Barbecu, Pete ‘n Keely (Drama Desk nomination for Outstanding Actress in a Musical), Play It Cool, Good Ol’ Girls, and The Best Is Yet To Come. Sally's much anticipated nightclub appearances have garnered her rave reviews from coast to coast, she has been nominated for twelve Manhattan Association of Cabarets & Clubs (MAC) awards, and has won two Back Stage BISTRO awards for excellence in cabaret and recording.

George Dvorsky is thrilled to be back with Sally, Mark, and Jim recreating Pete ‘n Keely. Broadway credits include the title role in THE SCARLET PIMPERNEL, GENTLEMEN PREFER BLONDES, PASSION, MARILYN: AN AMERICAN FABLE and THE BEST LITTLE WHOREHOUSE… National Tour: CHITTY CHITTY BANG BANG. Off-Broadway: THE FANTASTICKS, CLOSER THAN EVER, PETE N KEELY, DAMES AT SEA and ‘AND THE WORLD GOES ROUND. George starred in the NYC Premiere of Rodgers and Hammerstein’s Cinderella as Prince Charming at Lincoln Center. On PBS he was featured in PASSION: LIVE AT LINCOLN CENTER starring Patti LuPone and starred with Bea Arthur and the Boston Pops in BERNSTEIN’S BROADWAY.

The original production of Pete’n’Keely received an Outer Critics Circle Award nomination for Best New Musical along with two Drama Desk nominations. Here’s what the critics had to say:

“Broadway in a bottle! The brightest, happiest, most entertaining show in town!” Rex Reed

“Stylishness and charm few, if any, of today’s big Broadway musicals can begin to match.” - John Simon, New York Magazine.

“Sally Mayes can take your breath away...George Dvorsky is a smoothie onstage with a comic touch.” – New York Times.

The Return of “Pete ‘n Keely”