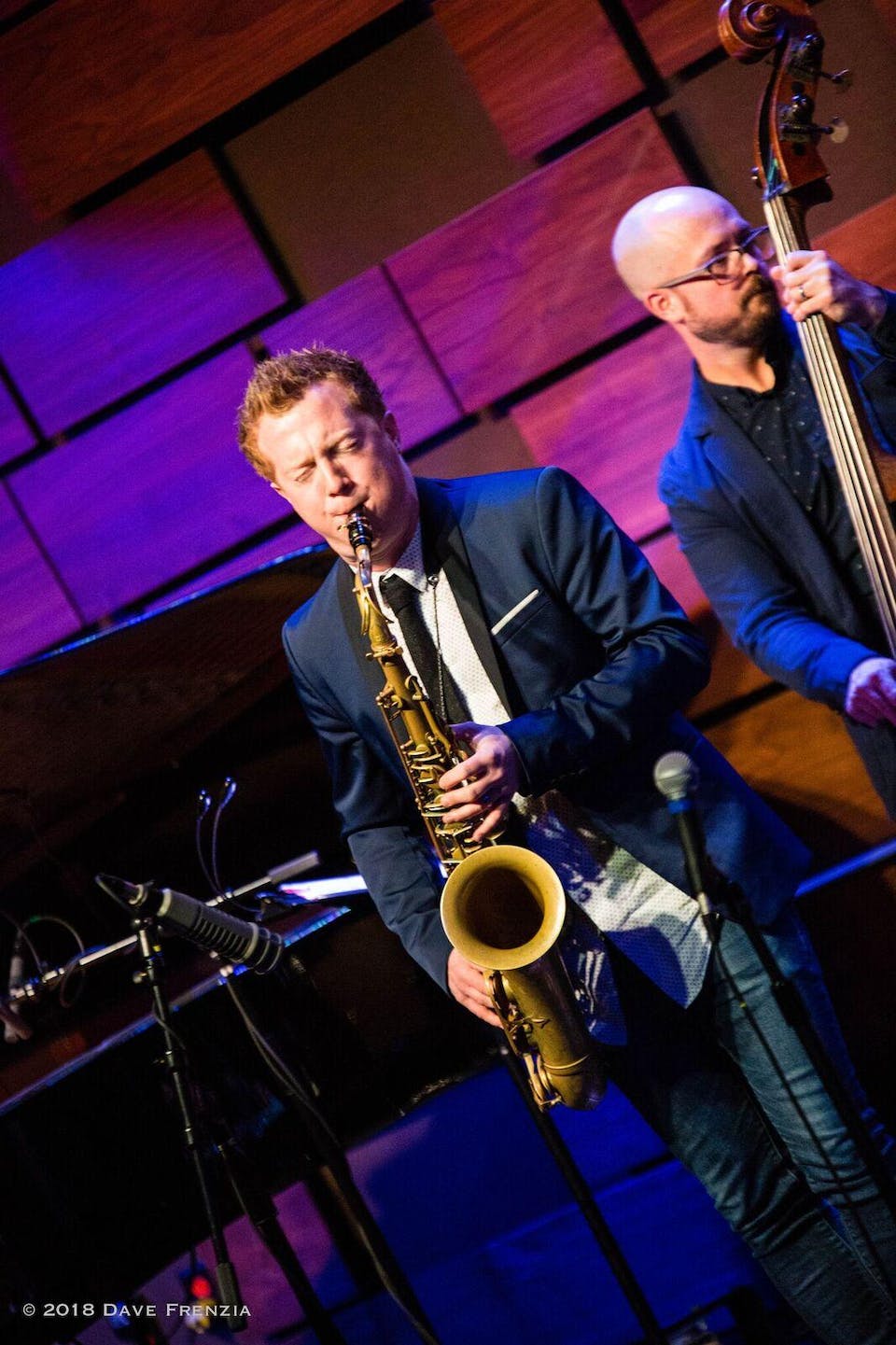 Originally from Normal, IL, saxophonist-composer Adam Larson, endorsed artist for P. Mauriat saxophones and Vandoren reeds, mouthpieces and ligatures, began playing saxophone at the age of 11. As a high school student, Larson was a member of virtually every national program dedicated to showcasing excellence in young jazz talent including The Grammy Band, Next Generation Jazz Orchestra, Betty Carter Jazz Ahead, YoungArts Jazz Fellows, Telluride Student All-Stars, Jazz Band of America and many others. Described by critic Howard Reich of The Chicago-Tribune as “a player for whom the word ‘prodigious’ was coined”, by Peter Hum of the Ottawa Citizen as “a saxophonist who brings Donny McCaslin and Mark Turner to mind”, and by Nate Chinen of The New York Times as “the sort of jazz musician who gets flagged early on as a promising talent and then hustles to meet every requirement for success”, Larson has garnered numerous awards that distinguish him as one of the most promising artists of his generation. Adam holds BM and MM degrees in Jazz Performance from The Manhattan School, where he graduated with honors as a Master's student as the recipient of the William H. Borden Award for Outstanding performance in Jazz in 2014.

Larson has released four albums; two under the Inner Circle Music label and two produced independently. Larson’s most recent recording “Second City” received a four-star rating from Downbeat magazine, was listed as one of the best releases of 2017 in both Downbeat and Jazziz Magazine, and was prominently featured in several publications. Larson keeps an active schedule with his own groups and as a sideman, having performed at several venues across the U.S. including The Jazz Standard, Birdland, The 55 Bar, The Jazz Gallery, The Blue Note, The Village Vanguard, Smalls, Cornelia St. Café, The Kitano, Dizzy’s Club-Coca Cola, Jazz at The Bistro, The Jazz Estate, The Jazz Showcase, and several others.

Adam has been a part of several tours that have allowed him to see more of the world than he once thought possible. Larson's quartet was selected as one of ten ensembles to tour on behalf of the U.S. State Department's "American Music Abroad" program and toured Africa for 35 days in 2015, visiting The Democratic Republic of Congo, Senegal, Benin and Ghana. Larson has also toured Poland, India, Taiwan, Holland, and Germany as well much of the United States.

Beyond maintaining an active touring and recording schedule, Larson continues to be a sought after clinician and master class presenter at several high schools and Universities across the Midwest and beyond, including appearances at HKU Conservatory-Utrecht, University of Iowa, Drake University, University of Northern Iowa, Temple University, Yale, Manhattan School of Music, University of North Texas, Elmhurst College, Roosevelt College, University of Illinois, Northern Illinois University, University of Wisconsin Eau-Claire, Illinois State University, Illinois Wesleyan University, University of Wyoming, and University of Northern Colorado among many others. Adam maintains an impressive portfolio of commissioned ensemble writing for school jazz ensembles, having written more than thirty original works to date. Adam was recently commissioned by the Illinois Music Educators Association to compose the All-State composition for the 2020 convention. Larson is a Teaching Artist for Jazz at Lincoln Center’s Jazz For Young People, The New York Pops Ed education programs, and has a diverse private lesson studio of Skype students from the U.S. and abroad as well as substitute teaching at The Manhattan School of Music and New York University. Larson has also served as an adjudicator for the YoungArts organization, as well as director of the YoungArts New York show, held at the Baryshhnikov Arts Center in New York City. Larson currently resides in New York with his beautiful wife, Tierney and son, Jack.