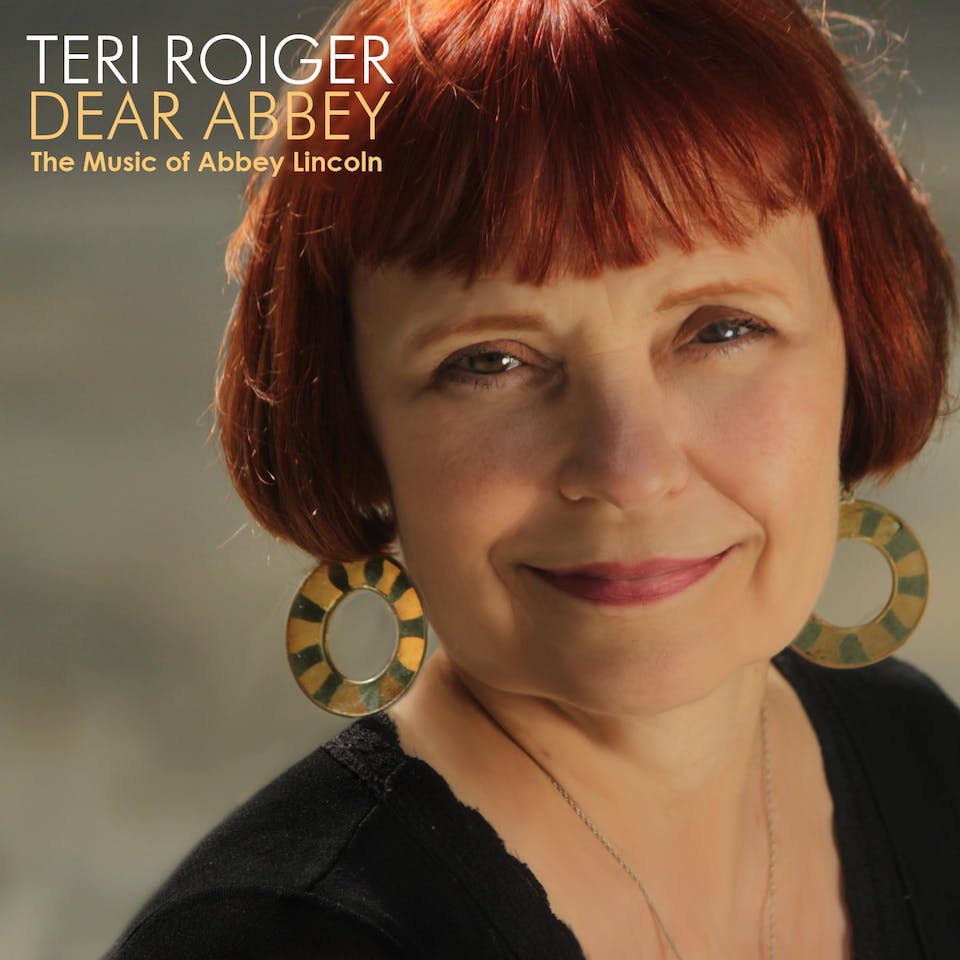 TERI ROIGER celebrates the music, lyrics, legacy, and birthday of ABBEY LINCOLN at Birdland Theater. She will be singing songs written by Ms. Lincoln, songs Ms. Lincoln made her own, and lyrics written by her to prominent jazz musicians’ compositions. Teri’s 2012 release "DEAR ABBEY: The Music of Abbey Lincoln" produced by Brian Bacchus, made the Jazz Journalist Association’s “best of” vocal releases list for 2012, and was featured as one of the five best tribute releases chosen by Laurence Donohue-Greene, Editor of New York City Jazz Record, in their January 2013 issue.

She will be joined by pianist JAMES WEIDMAN, one of the most versatile pianists in the world of music. He performed for many years with Abbey Lincoln and currently performs with Joe Lovano, among many others. Well known for his versatility, he is hailed as "unfailingly lyrical," "convivially assertive," and "exquisite.” A longtime pianist in Ms. Roiger's bands, Weidman’s style complements the voice perfectly. Bassist JOHN MENEGON’s tenure with legendary saxophonists David “Fathead” Newman and Dewey Redman provided a solid foundation for him to continue his explorations as a bassist, bandleader, and arranger. Menegon crafted the imaginative arrangements on Teri’s DEAR ABBEY recording. “New York bassist John Menegon is in the line of George Mraz and Michael Moore; a harmonically sophisticated bassist with technical facility who swings hard when it’s called for.” Kirk Silsbee, Downbeat! With all the rich, combined experience of Roiger, Weidman and Menegon’s collaborations, expect a dynamic evening of inventive, spontaneous musicianship!

An American jazz musician, vocalist, pianist, songwriter, educator, and producer, Teri lives in New York City and also in New York’s Hudson Valley. She began playing piano at age 5, and played church organ throughout her teens. When she discovered jazz in her early 20s – and soon after made her first demo with the legendary stride pianist, Butch Thompson – her musical path was set. Teri has since performed throughout the U.S., Canada, Mexico, and Europe, and has been a featured artist at the San Miguel Jazz Festival, Panama Jazz Festival, and Bolzano Jazz Festival. The depth of her experiences and love of jazz is apparent when she brings all of her talents to bear in her live performances, the recording studio, and through her moving lyrics and compositions.

Teri has an intuitive laid back sense of time reminiscent of Abbey Lincoln & Betty Carter, but with her own uniqueness. Jack DeJohnette, 2012 NEA Jazz Master and legendary jazz drummer

One afternoon in Minneapolis, a young Teri Roiger sat down at a piano amidst a group of seasoned musicians, and played a burning rendition of John Coltrane’s Giant Steps. An astounded nearby bass player said, "Hey, you aren't supposed to be able to do that," a remark that ignited Teri’s determination to pursue a life in jazz. After years of “doing that,” Teri feels her latest recording is her most personal and powerful to date. Her fourth release as a bandleader – GHOST OF YESTERDAY: Shades of Lady Day – is a heartfelt tribute to Billie Holiday.

Noting that Ms. Holiday provided the initial spark that led to a lifelong commitment to jazz, Teri says, “This recording brings me full circle. I was immediately moved upon first hearing Holiday’s recordings. I felt all kinds of emotions I didn’t know how to express; emotions I hadn’t felt before, and it awakened something in me that I treasure. This tribute is something I've wanted to do since I began singing Billie Holiday’s music in my 20’s. In spite of her challenges, Billie was able to persevere and make incredible music that was filled not only with sorrow, but also with joy. I’m in awe of that ability.” On this multi-dimensional project, Roiger celebrates and honors Lady Day’s legacy by showing the many facets of Billie – her ebullient joy, her rebellious spirit, her rich sensuality, and the depth of her blues. In addition to recording re-imagined versions of Billie classics, Roiger also includes three interesting songs inspired by Billie, all of which appear here on disc for the first time with Teri’s original lyrics, as well as the Gil Scott-Heron classic Lady Day and John Coltrane. GHOST OF YESTERDAY: Shades of Lady Day, was chosen by acclaimed author & critic Scott Yanow as one of his 30 top new releases of 2017.

A voice like the finest bittersweet chocolate full of rich, dark, contradicting flavors that miraculously blend to create one of the most original vocal instruments in decades! Vic Garbarini, Playboy Magazine

Roiger’s original offerings to Ghost of Yesterday are lyrics to Lady Day penned by Roiger, along with her lyrics to the melodies of two of Lester Young solos, which reflect her empathetic embrace of the music, while exploring Holiday’s intriguing musical relationship with Young. She also added lyrics to an Ella Fitzgerald solo which appear on the track Them There Eyes. Holiday aficionados will recognize that Roiger pays special tribute to Lady In Satin, one of Billie’s most hauntingly heartfelt albums, with new and beautiful arrangements of You Don’t Know What Love Is and It’s Easy To Remember.

Teri’s 2012 release, DEAR ABBEY: The Music of Abbey Lincoln, produced by Brian Bacchus, made the Jazz Journalist Association’s “best of” vocal releases list for 2012, and was featured as one of the five best tribute releases in NYC Jazz Record’s January 2013 issue. Teri’s acclaimed composition STILL LIFE, title track of her second release (with Frank Kimbrough, Gil Goldstein, Matt Wilson, and John Menegon) won third prize in the jazz category of the International Songwriting Competition. On her debut CD, MISTERIOSO, Teri and her husband, John Menegon, collaborated to arrange and produce a collection of tunes featuring jazz legends Kenny Burrell and Jack DeJohnette. On that album, Teri’s original lyrics to Monk’s Misterioso (renamed Listen To Your Soul) were recorded with the blessing of the Thelonious Monk family.

Her notes, her swing, her sound, and the all-encompassing soulfulness of Teri giving meaning to the music and the moment said all there is to say. She had all of the essence that anyone wants to hear anytime from a true jazz singer…She is made for those who still understand the meaning of the term the real thing. Stanley Crouch (author, cultural critic & 2019 NEA Jazz Master) @ DIZZY’s Club Coca Cola Teri’s CD release

Since 1998, Roiger has shared her knowledge and inspiration with her students in the SUNY New Paltz Jazz Program (New Paltz, NY), where she teaches Jazz Voice, History of Jazz, and Vocal Jazz Ensembles. Over a four-year period, she also developed and presented four in-depth courses at Williams College (Williamstown, MA): The Music of Billy Strayhorn, The Music of Thelonious Monk, A Survey of Brazilian Music, and an extensive Vocal Jazz Ensemble Performance course.

ALL ABOUT JAZZ: Roiger’s warm contralto, like aged, fine whiskey, is smooth but heady.

Pianist James Weidman is indisputably an essential addition to whatever bandstand he graces. A partial list of Weidman's affiliations is staggering in depth & breadth: Max Roach, Woody Herman, Archie Shepp, James Moody, Greg Osby, Bobby Hutcherson, Slide Hampton, Jay Hoggard, Marvin "Smitty" Smith, Gloria Lynne, Dakota Staton, MBase Collective, Cassandra Wilson, TK Blue (co-leader of Taja), Abbey Lincoln, Ruth Naomi Floyd (Producer), Kevin Mahogany (Music Director), Joe Lovano, Marty Ehrlich and Ray Anderson. That list includes several NEA Jazz Masters, musical trailblazers, and great singers; relationships requiring both the skilled touch of an adept soloist as well as superior accompaniment expertise. The gifted Mr. Weidman has it all. Adroit in myriad styles, Weidman's resourcefulness has served him well. "The more genres you're comfortable with, the deeper your understanding of music," is how Weidman characterizes his broad range of associations. Such versatility has helped Weidman develop his brilliant technique and, as his mantra to his students at William Paterson University suggests, "the better your technique, the better your communication." However, the content of that communication is the most important thing. "You're really telling a story to your audience," he says. "It's a shared journey. That's why I called my first solo album People Music, because we are all supposed to share this music.”

New York bassist John Menegon began his career as a musician in Montreal. After having worked for several years on the Canadian jazz scene, Menegon moved to New York City to study jazz at Long Island University. John has been composing and arranging music throughout his career, and the ten years he spent as bassist for two legendary tenor saxophonists, Dewey Redman and David “Fathead” Newman, provided a solid foundation for Menegon to continue his explorations as a bandleader, composer, and arranger. Having spent over a decade performing, touring, and recording with each of them, these jazz legends have taken John around the world, playing at jazz festivals in South Africa, Argentina, Turkey, Brazil, Mexico, Europe and the U.S., and have been a major influence in his playing and compositions. John appears on Newman’s four most recent CDs on High Note Records. The influence of these jazz legends, as well as master drummer Paul Motian, Brazilian vocalist Gal Costa, and Ray Charles, are remembered and reflected in Menegon’s compositions on his 2014 recording, “I Remember You,” receiving a four-star review in Downbeat Magazine. Menegon’s latest release, “Blew By Blues,” with his new band “Quartet East” is a dedication to the late, great Charlie Haden and features Joel Frahm, Frank Kimbrough, and Steve Williams, as well as four vocalists. “New York bassist JOHN MENEGON is in the line of George Mraz and Michael Moore; a harmonically sophisticated bassist with technical facility who swings hard when it’s called for.” Kirk Silsbee, Downbeat!

Born and raised in Cleveland Heights, Ohio, Neal Smith has been playing drums since the age of five. By the time he completed high school he had achieved a remarkable list of performance accomplishments and earned an impressive array of awards, scholarships, and honors. With the support of his family, Neal continued his studies at the Oberlin Conservatory of Music where he received a Bachelor of Music in Jazz Studies and Performance, the first African-American to earn a degree in Jazz Studies from the Conservatory. In addition to his academic training, Neal has studied with Vernell Fournier, Greg Bandy, Paul Samuels, Tom Freer, Bruce Collie, and Gordon Gottlieb. Neal performs regularly in clubs and concert halls, at colleges and universities, and at U.S. and International Jazz Festivals. Neal leads his own group, which performs original compositions as well as classic arrangements of jazz standards. Neal also performs regularly with internationally recognized artists and has shared the stage with the likes of Tom Harrell, Anita Baker, John Hicks, Donald Byrd, Kenny Burrell, Sonny Fortune, Jimmy Owens, Eddie Harris, Isaac Hayes, Gary Bartz, Benny Golson, Donald Walden, Frank Morgan, Brian Lynch, Benny Green, Cyrus Chestnut, Frank Foster, Dewey Redman, Mark Whitfield, Ronnie Mathews, Rufus Reid, Wendel Logan, James Moody, Marlena Shaw, Charles Davis and Vanessa Rubin. Neal also leads his own group, which performs original compositions as well as classic arrangements of jazz standards. Beyond performing, Neal loves to teach developing drummers. He is currently a Professor at Berklee College of Music. http://nsjazz.com/