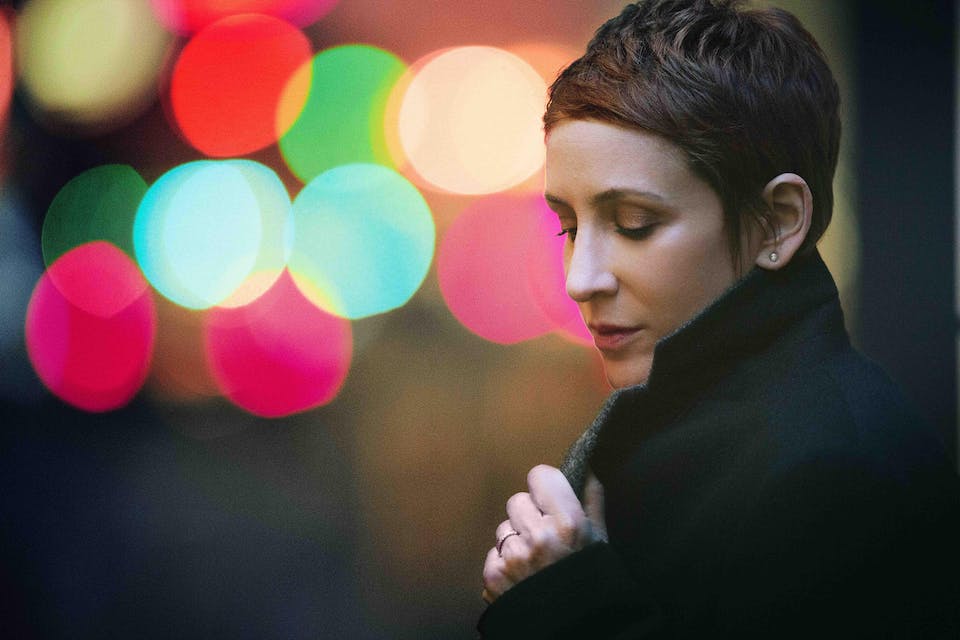 Stacey Kent is a jazz singer in the mould of the greats, with a legion of fans worldwide, a host of honors and awards including a Grammy nomination, album sales approaching 2 million, Gold, Double-Gold and Platinum-sellingalbums that have reached a series of No. 1 chart positions during the span of her career.

Raised and schooled on the east coast of the USA, this comparative literature graduate with a musical bent, travelled to Europe to further her studies. In 1990, through a series of twists of fate, she found herself in London where she enrolled in a graduate music program at the Guildhall School of Music and Drama and where she met her future husband and musical collaborator, Jim Tomlinson.

Kent's musical journey began in her childhood with piano lessons. An unusually keen ear and true voice lead her to participate in school musical productions, and throughout her time at Sarah Lawrence College in New York, she could often be heard singing at impromptu musical events in the college's cafe. However, nothing suggested the shift in career that has propelled her to international recognition. With a catalogue of 10 studio albums including the Platinum-selling, GRAMMY-nominated 'Breakfast On The Morning Tram' (EMI/BLUE NOTE 2007) and an impressive list of collaborations, Stacey has graced the stages of more than 50 countries over the course of her career. Kent paid her dues in the jazz clubs of London, including the famed Ronnie Scott's Cub, where she still performs every year, before releasing the first of a series of 6 albums, 'Close Your Eyes' (1997), for the Candid label. Her second album, 'The Tender Trap' (1999) brought her to the attention of jazz audiences in the USA when ‘CBS Sunday Morning’ and NPR's 'All Things Considered' featured her. After that, albums and awards followed. Let Yourself Go, a celebration of Fred Astaire was released in 2000, ‘Dreamsville' (2001) led to Stacey being awarded the Jazz Vocalist of the Year in the 'BBC Jazz Awards'. 'In Love Again', a collection of Richard Rodgers songs followed in 2002. 'The Boy Next Door' (2003) was Stacey's last Candid release and her first album to achieve Gold status.

During this period, Stacey cemented her reputation as a singer capable of putting a distinctive stamp on an impressive repertoire of standards. Her ability to communicate emotion through a nuanced and minimalist approach was showcased on Jim Tomlinson's album, 'The Lyric' (Token) which was awarded Album of The Year at the '2006 BBC Jazz Awards'. This album brought her to the attention of Blue Note records with whom she signed in 2007. With each successive album, Stacey's style has become more honed as her artistic outlook has broadened. Stacey's search for songs had led her to look beyond the Great American Songbook, with French chanson and Brazilian music forming an ever-larger part of her repertoire. During a lunch with Jim, and friend and author, Kazuo Ishiguro, the conversation turned to repertoire and the idea was hatched to write a series of songs for Stacey that distilled themes of memory, travel and love, that so frequently surfaced in her repertoire. From this conversation, the songs for 'Breakfast On The Morning Tram' were conceived. Stacey transformed from being a singer of the Great American Songbook, to a singer with a highly distinctive and personal repertoire. The first collaboration between Ishiguro, the lyricist, and Tomlinson, the composer, 'The Ice Hotel', won first prize in the International Songwriting Competition song. Since then, all of Stacey's albums have been punctuated by original songs composed by Tomlinson with a variety of lyricists in English, French and Portuguese. Stacey has continued to pursue a frenetic recording and touring schedule. Her first album for Blue Note was followed in 2009 by the Gold-selling, all-French, 'Raconte-Moi'. She was invited to perform an all-French program at the Francofolies Festival and was awarded the Chevalier Dans L'Ordre Des Arts et Des Lettres. Her first ever live album, 'Dreamer In Concert' (EMI 2011), was followed by 'The Changing Lights' (Warner 2013), which more than any other album, reveals the ever-present influence of Brazil in Stacey's music.

Stacey's first visited Brazil in 2008 when she was invited to perform at the TIM Festival. She vowed not to return until she spoke Portuguese. True to her word, she enrolled with Jim on the Middlebury College Summer Schools immersion program, where she had previously studied French, Italian and German. She returned to study the following two summers and now counts Portuguese among the other languages that she already speaks. On subsequent visits to Brazil, she met many of her musical heroes, including Marcos Valle and Roberto Menescal. She has recorded with both Valle and Menescal, having been invited to record with Valle to celebrate his 50 years in music on the album, 'Ao Vivo' (Sony 2013). A DVD and documentary of their collaboration are also due for release in Aug 2016.

With Roberto Menescal, Stacey recorded her most recent release, ‘Tenderly' (Sony 2015), an intimate collection of standards that showcases her crystalline voice and Menescal's warm guitar. Jazzwise Magazine referred to the album as "an extremely beautiful meeting of minds” It is Menescal's only recording as a jazz guitarist and demonstrates the debt he owes to the great Barney Kessel. As Kent's first standards album in a decade, it shows her increasingly impressive and maturing interpretative gifts.

Following a recent successful concert series with the Bordeaux Symphony Orchestra, Stacey is currently planning an ambitious album for release in 2017 on SONY. She continues to tour with sold-out concerts and festival appearances around the world.