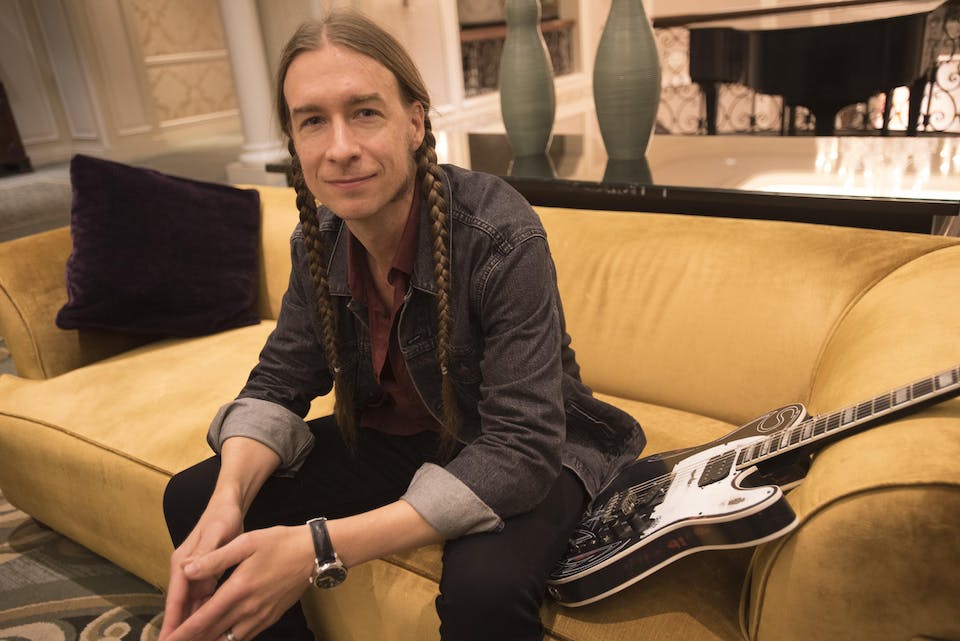 Facebook
Twitter
Email
Join us at the Birdland Theater for Slim Gambill the Lead Guitarist for Lady Antebellum!

For the past 12 years, music fans across the globe have come to know guitarist Jason“Slim” Gambill as the secret weapon of country superstars Lady Antebellum. Of course, he makes sure he’s hard to miss: His two-foot-long braids are as easily recognizable as his fiery, hook-filled, rock-and-soul-infused solos. In short, when it comes to authenticity and individuality, Gambill is as real as it gets.So it comes as something of a head scratcher that he’s called his first solo album FakeJazz & Theme Songs, especially when there’s nary a smidgen of a false note or anoverly stylized moment to be found on the entire disc.

With characteristic modesty, Gambill explains the tongue-in-cheek first half of the title thusly: “I guess you could say I’m a tourist when it comes to jazz, much in the way that I’ve been to London, but I’ve never lived there. My music is very informed by the genre, but I would never put myself on the level of guys who have devoted their lives to jazz.” Which isn’t to say that Gambill hasn’t put in his time with jazz. Back when he was a student at the University of Southern California, he spent countless hours transcribing standards as part of his studies in the Studio Jazz Guitar Program.

“It was great training, but I just couldn’t see spending a week writing out somebody else’s solo,” he says. “I wanted to write and play my own music. That’s what I was itching to do.” As for the “theme songs” portion of the title, it harkens back to Gambill’s earliest days as a player, when he would sit in front of the TV and jam along to the music in ‘80s police dramas. “I learned so much about the guitar that way,” he says. “I still love to practice to the TV. I don’t even consider it practice – it’s just fun.”