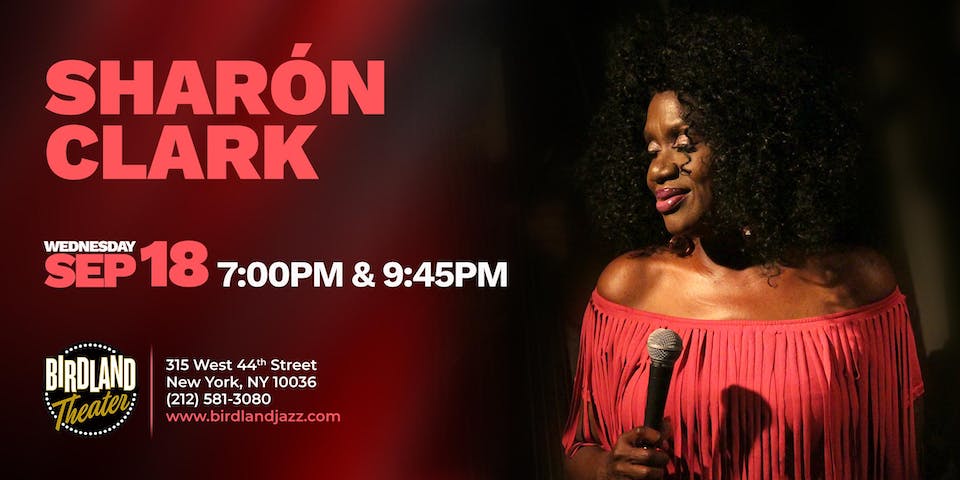 Seating is First come First Serve for table AND bar

Washington, D.C. standout Sharón Clark has brought festival and concert audiences to their feet across the U.S. and Europe. Her New York run drew raves from the NY Times and the Wall Street Journal, and she won New York’s Bistro Award for Best Vocalist.

Ms. Clark has made multiple international tours in recent years, making her debut in Israel and returning to Russia, where she has developed a major following. Her most recent release, “Do it Again — My Tribute to Shirley Horn,” is on its third printing, and she grabs top honors wherever she goes.

Ms. Clark won the Gold Medal and $10,000 top prize at the Savannah Music Festival's American Traditions Competition. She then took first place in the Billie Holiday Vocal Competition, which offers a $2,500 prize along with a featured appearance with the Baltimore Symphony.

Ms. Clark appears regularly in DC at Blues Alley and Loews Madison Hotel. A featured soloist with the Smithsonian Jazz Masterworks Orchestra, the Richmond Symphony, and the Baltimore Symphony, Clark has headlined the Duke Ellington Jazz Festival, the Cape May Jazz Festival and the Savannah Music Festival. Both the Smithsonian Jazz Masterworks Orchestra and The Ludacris Foundation chose Ms. Clark to perform for their separate tributes to Quincy Jones.