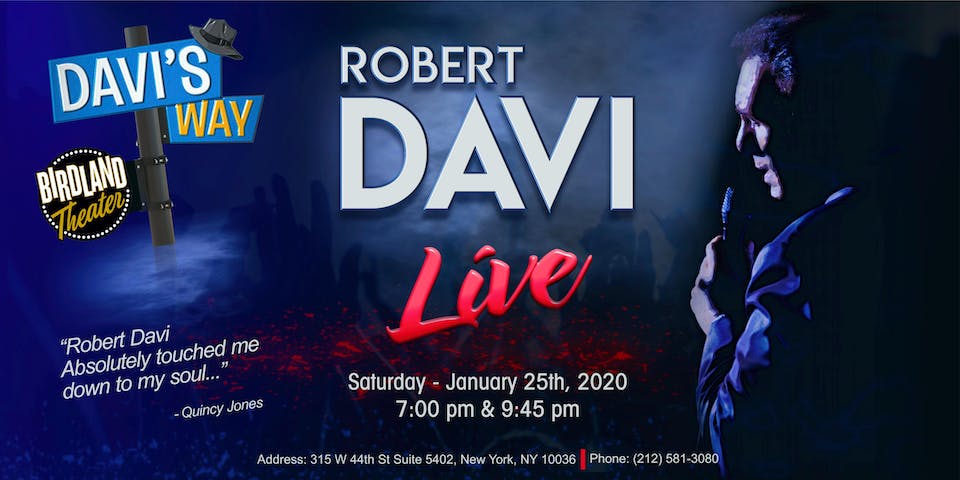 While he is recognized as one of film’s best-known tough guys, Robert Davi has been winning the respect and admiration of fans, critics and fellow artists with his expressive singing. His Album, Davi Sings Sinatra: On The Road To Romance, produced by the legendary Phil Ramone, catapulted its way into Billboard magazine’s top ten (#6) traditional jazz chart.

While, Davi Sings Sinatra: On the Road to Romance and his dynamic livevperformances may have surprised some of his fans, Davi’s love of music and entertaining began at an early age. At 15, he won First Place in the prestigious New York State School Music Association Solo Competition. As a young adult, he studied under several top vocal teachers including the legendary Tito Gobbi, Dan Ferro of Juilliard, Samuel Margolis (who taught Robert Merrill) and most recently, renowned vocal coach Gary Catona.

In his latest film role, Davi adds to his movie legacy. He joins the most recent installment of the popular franchise “The Expendables 3,” (to be released later this year). From the memorable villain, Colombian drug lord Frank Sanchez, in the Bond film “License to Kill” (voted one of the top Bond villains of all time) to his stand-out performances in “The Goonies,” “Die Hard,” “Kill the Irishman,” “The Iceman” and many other films to the respected series “Profiler” and “Stargate: Atlantis,” Davi has appeared in over 100 movies and many television programs. He has garnered praise from critics, directors and co-stars, including Steven Spielberg, Richard Donner, Blake Edwards, John McTiernan, and Paul Verhoeven. He has acted opposite Marlon Brando, Roberto Benigni, Bruce Willis, Clint Eastwood, Benicio Del Toro, Danny Glover, Michael Shannon, Chris Evans, James Franco, and Val Kilmer, among others. GQ Magazine has compared him to silver screen classics Robert Mitchum and Lee Marvin. His tough exterior masks an inner sensitivity, which he has brought to his roles as a Palestinian terrorist in the award-winning TV movie, “Terrorist on Trial: The United States vs. Salim Ajami,” and in memorable appearances in “CSI: Crime Scene Investigation,” “Without a Trace,” “Law & Order: Criminal Intent,” “Criminal Minds” and many more.

In 2007, Davi produced, directed co-wrote and starred in “The Dukes,” the story of a successful Doo Wop group who falls on hard times. At the Monte Carlo Festival of Comedy, Davi was awarded Best First-Time Director and Best Screenplay for the film and he was the only first-time director in the Premiere Section of the International Rome Film Festival, with films by Sean Penn, Robert Redford, Sidney Lumet and Julie Taymor.

Hailing from Astoria, Queens, NY, Davi attended Hofstra University on a drama scholarship. He moved to Manhattan to study with legendary acting coach Stella Adler, who became his mentor. He subsequently became a lifetime member of the Actors Studio, studying with acting teacher Lee Strasberg and also studied under Sandra Seacat, Larry Moss, Milton Katselas, Martin Landau, Mala Powers, and George Shdanoff, the creative partner and collaborator with the influential Michael Chekhov. His first screen appearance was opposite Frank Sinatra in the telefilm, “Contract on Cherry Street.”