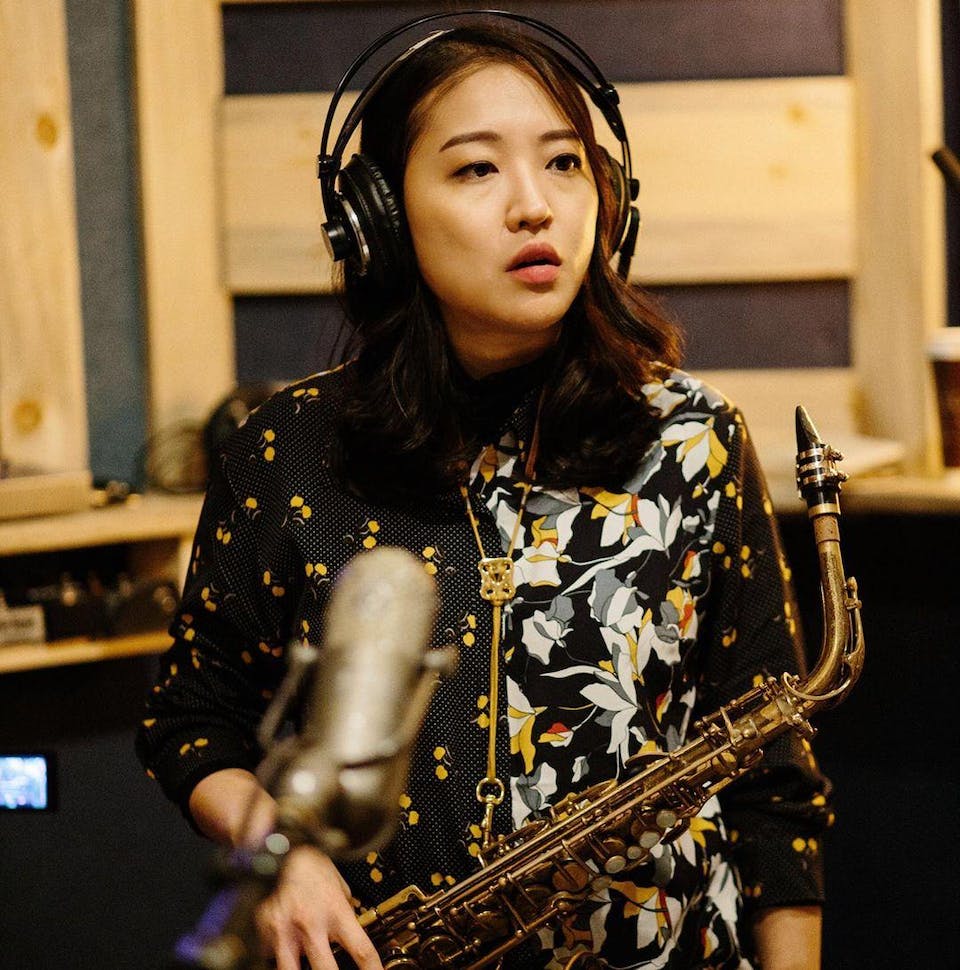 “...Like Woods in his early years, she’s one of those players who sounds like she was never a beginner, already having found her tone, speed of execution and a generously filled ideas bag. Not many young players can put out an hour of top-tier material without filler...” - Brian Morton, Downbeat Magazine

“...Albums like The Real Blue are worth waiting for. The reward, for the listener, comes in the form of Pureum’s warmth and ingenuity, her confidence and her commitment to her own artistic vision. This album is a gem. Now that it’s finally in the light, we can perceive its brilliance...” - Brian Zimmerman, JAZZIZ Magazine

Pureum Jin is a South Korea-born, NYC-based saxophonist, arranger, and composer, establishing herself as one of the leading figures in the jazz world with her recently released album ‘The Real Blue’ through Cellar Live in June 2019. The title of the album ‘The Real Blue’ is a direct translation of her Korean name in English, as the tunes reflect the journey of her life and career after coming to the US – struggling as a woman, immigrant, and a mother, but moving forward with the love and support of family and friends. Pianist and executive producer Jeremy Manasia has put together an all-star lineup, including the great Willie Jones III on drums, and rising stars Luke Sellick on bass, and Sabeth Perez on vocals. Since its release, the album has been receiving rave reviews from prestige jazz magazines, such as a 4-star review from Downbeat on its September issue, being featured as one of the albums on Jazz at Lincoln Center blog’s June New Release Round-up, making a cover of Jazz People Magazine in Korea, etc.

While relocating to the US in 2015 to attend master’s program at MSM, Pureum has been building her brand as a notable jazz icon in both Korea and international jazz scene; a driving force and leader in the continuing movement of women in jazz. She had been staging in major international jazz festivals as both a leader and sideman including Edinburgh Jazz & Blues Festival (Scotland, 2012), Takatsuki Jazz Street (Japan, 2010), Seoul Jazz Festival (Korea, 2013), Jarasum International Jazz Festival (Korea, 2009-2014), Jazz Korea Festival (Germany 2012 and 2013), DC Jazz Fest (US, 2018), and GREC Music Festival (Spain, 2018) just to name a few. She was chosen as one of the five rising stars by prestige Korean jazz magazine Jazz People in 2012 and made one of the top five finalists in Jarasum International Jazz Concours (Korea) in the same year. She was also selected as one of the next generation Korean jazz icons to perform at EBS Space Gonggam on TV in 2015, celebrating their 10-year anniversary.

Soon after graduation from MSM in 2017, she moved to Charlottesville, VA for a year to be with her family, where she actively performed as a member of the great John D’earth’s Sextet and being featured as artist in residency at UVa Jazz ensemble in November 2017. After moving back to NYC in summer of 2018 and with her latest album released in June 2019, she has been quickly establishing herself as a notable jazz figure in the US, and particularly at the epicenter of jazz – New York City. This is evident, as she makes debuts on most notable jazz clubs in the city with rave review from the magazines, selected as one of the finalists for the Made in New York jazz competition 2018, and recently being listed as a finalist on multiple categories of Hot House Jazz Awards 2019.

She has a live album released through Nagel-Heyer in 2013 ‘Live in Europe’ and another album ‘The Real Blue Live in Barcelona’ to be released in January 2020 with a Spanish maestro Ignasi Terraza through SWIT Music. She holds a Master of Music in jazz performance from Manhattan School of Music (2017), and a Bachelor of Music in Postmodern music from Kyung Hee University (2008).