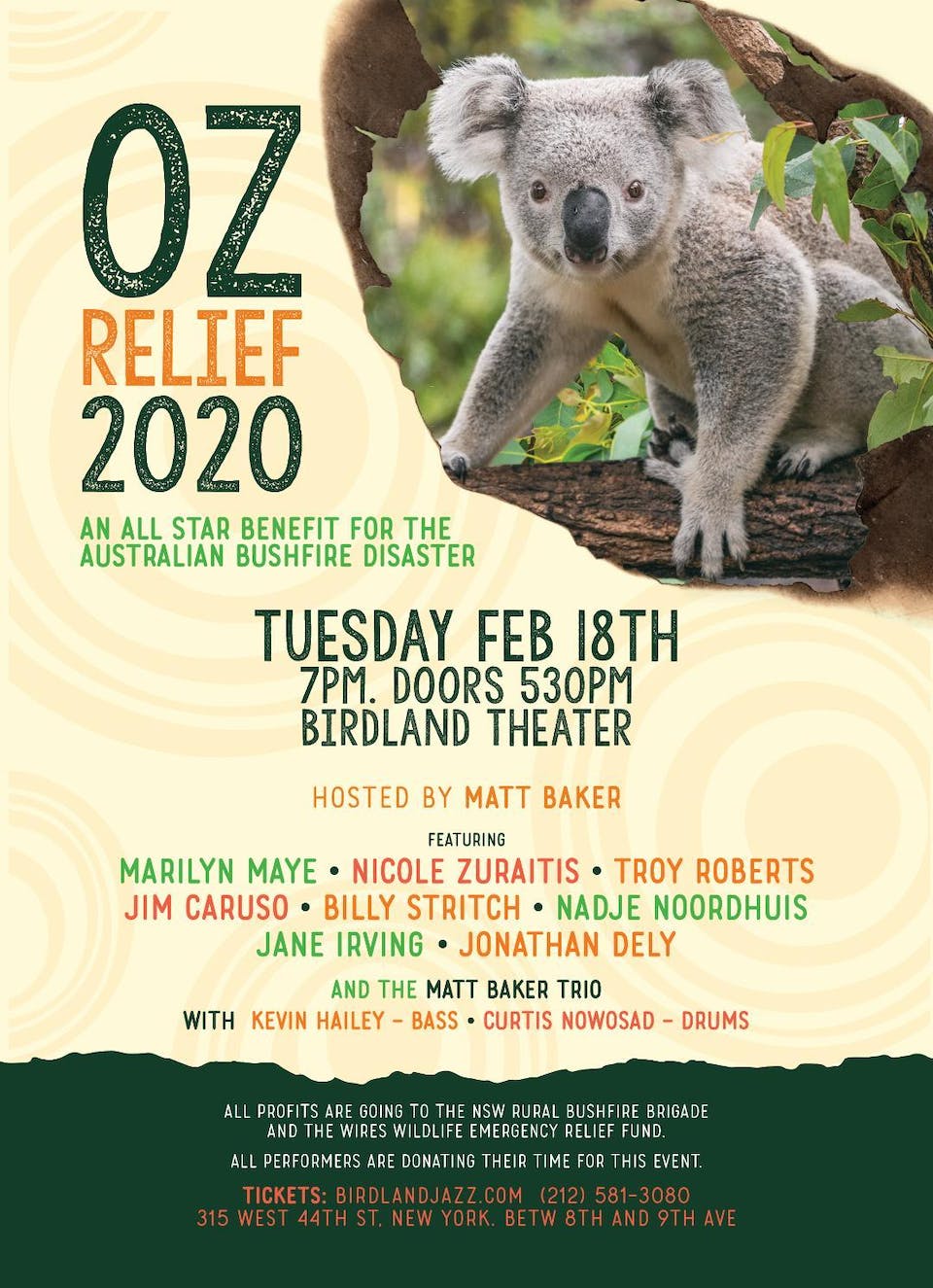 Facebook
Twitter
Email
Join us at the Birdland Theater for a Benefit for the Australian Bushfire Disaster. Matt Baker Hosts "Oz-Relief 2020"

An All-Star Benefit for the Australian Bushfire Disaster

Baker and his friends, Marilyn Maye, Nicole Zuraitis, Troy Roberts, Nadje Noorhuis, Jane Irving, Jonathan Dely, Billy Stritch, and Jim Caruso will perform in response to the devastating bushfires currently sweeping across Australia. The Matt Baker Trio will include Kevin Hailey on bass and Curtis Nowosad on drums. The blazes, which have been burning across the country for months, have killed at least 25 people, razed over 2000 homes and wiped out entire towns. Nearly 18 million acres of land have been burned and the total number of animals affected could be as high as a billion. All profits will go to the Australian Rural Bushfire Brigade and animal rescue emergency funds.

Australian-born jazz pianist Matt Baker leads a powerful trio in New York City, which he has called home since 2010. He performs regularly as a sideman at jazz venues including Birdland and The Blue Note, tours both within the USA and internationally as a bandleader and sideman and has released 6 albums, his latest a DVD album “Live at Birdland.”

In 2019 Matt premiered his brand new project “A Rhapsody Of Gershwin” at Birdland Jazz Club in New York, presenting a whole new spin on the music of one of America’s most celebrated composers, with an all-star lineup from the heart of New York’s jazz scene, including Endea Owens on bass, Curtis Nowosad on drums, and 2019 Grammy-nominee vocalist Nicole Zuraitis. The project – Gershwin arranged like never before and fusing jazz with classical, comprises music from Porgy and Bess, An American in Paris, the Rhapsody in Blue and Concerto in F, plus other exciting gems from the classical and popular worlds of George Gershwin! Matt Baker’s sideman credits include touring and performing with vocalists Ann Hampton Callaway, Jennifer Holliday, Vanessa Williams, Patti LaBelle, Veronica Swift (2015 Monk competition winner), Tierney Sutton, Arianna Neikrug (2015 Sarah Vaughan competition winner), guitar icon Bucky Pizzarelli, tenor saxophonist Joel Frahm and Judy Collins.

Matt Baker was an award winner himself in the 2003 Montreux International Solo Jazz Piano competition and a semi-finalist in 2004 and 2005. A student of Taylor Eigsti’s since moving to New York, Matt watched Oscar Peterson perform live an entire week at the Blue Note, from which a friendship between the two formed in the remaining years of Peterson’s life. Baker has also studied with Mulgrew Miller, Benny Green, Jacky Terrasson, and Ella Fitzgerald’s life-long accompanist Paul Smith.