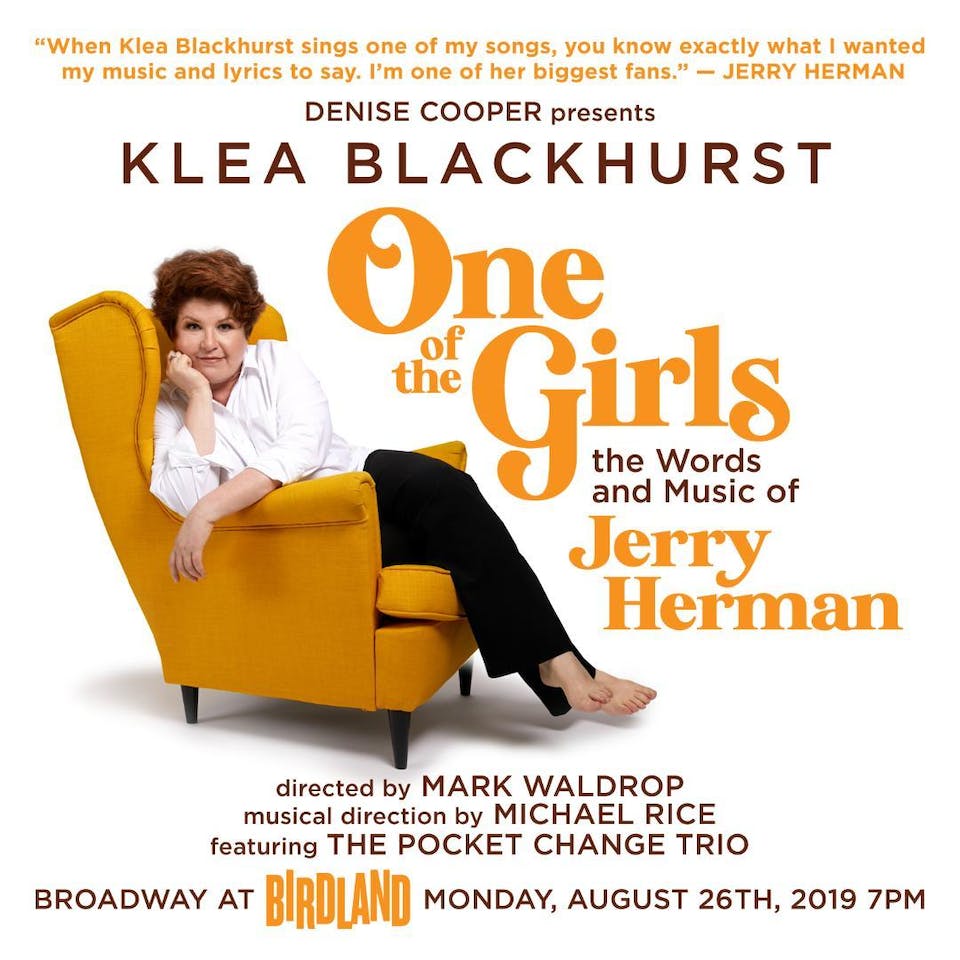 Klea Blackhurst "One of the Girls"

Facebook
Twitter
Email
Birdland is proud to announce that Klea Blackhurst will be premiering her solo show "One of the Girls" a tribute to Jerry Herman!

“One Of The Girls”

A Tribute to Jerry Herman

The Broadway at Birdland concert series is proud to announce that singer/actress Klea Blackhurst will be returning to the stage with a brand new solo show, “One Of The Girls,” a tribute to Jerry Herman.

“When Klea Blackhurst sings one of my songs, you know exactly what I wanted my music and lyrics to say. I’m one of her biggest fans.” Jerry Herman

Singer/actress Klea Blackhurst turns her long association with one of Broadway’s most esteemed composers, Jerry Herman, into a brand new solo show, “One Of The Girls.” Considered one of Herman’s premier interpreters, Klea officially became one of “Jerry’s Girls” when she starred in the 50th Anniversary production of Hello, Dolly! at Goodspeed Opera House. But the two were introduced years before, when Jerry heard Klea sing one of the cut songs from Hello, Dolly! written for Ethel Merman, the original choice to star in the show. He immediately invited Klea to sing with the London Philharmonic at the Palladium and she’s been singing his songs with symphony orchestras across the country ever since. “One Of The Girls” will focus attention on the powerful, loving and memorable women in Jerry’s life…both real, like his dear mother Ruth who taught him that you could throw a party simply because “It’s Today” and characters like Mame, who encouraged us to “Open A New Window,” Dolly Levi, who decided to rejoin the human race “Before The Parade Passes By,” and Zaza, who bravely declared, “I Am What I Am.” Jerry Herman has lifted wonderful women off the page and into our hearts for almost six decades.

Produced by Denise Cooper. Directed by Mark Waldrop. With Musical Direction by Michael Rice, who will be leading the Pocket Change Trio.

“One Of The Girls”