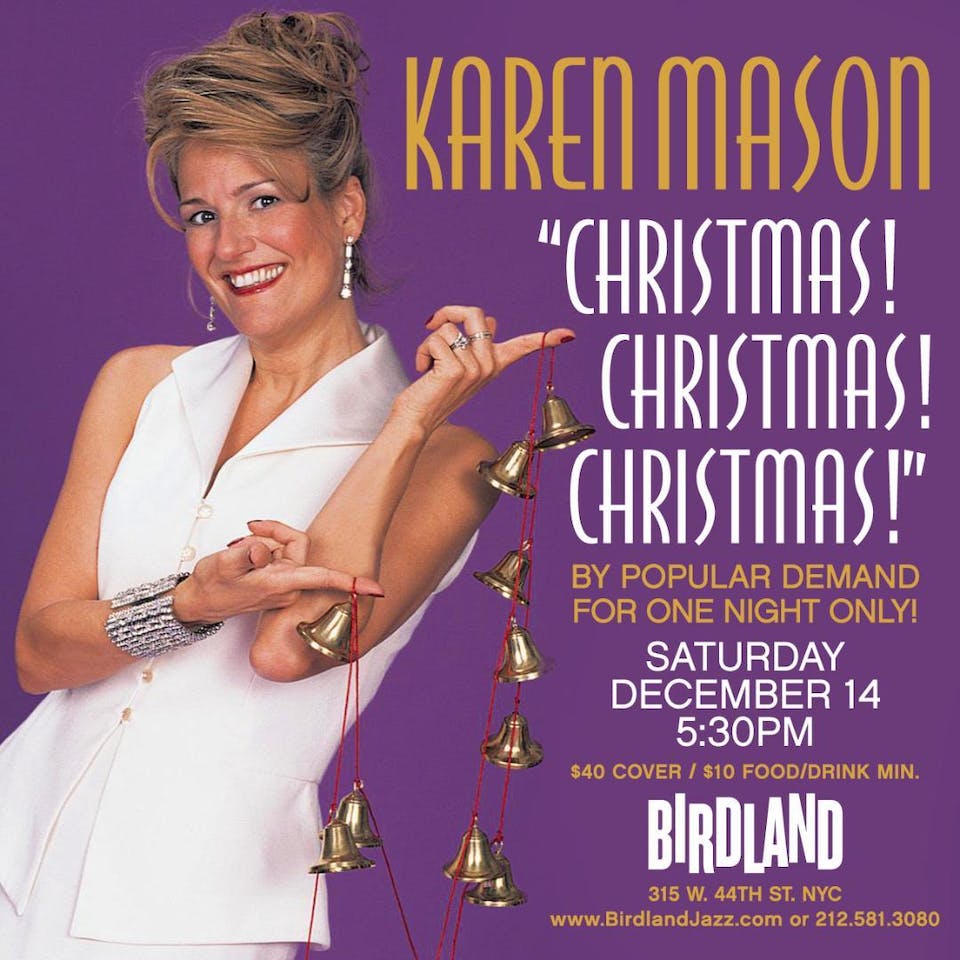 Facebook
Twitter
Email
Birdland is proud to announce that Broadway and cabaret star Karen Mason will perform her legendary Christmas show, on December 14 at 5:40pm

By popular demand, this concert has moved from Birdland Theater to the larger showroom.

After more than a year in the North American premier tour of Andrew Lloyd Webber’s Love Never Dies, playing Madame Giry to standing ovations, Karen is thrilled to be home in NYC and returning to her love of cabaret. With her Director Barry Kleinbort, and her Music Director Christopher Denny, Karen’s annual holiday show (since 1985!) will feature favorite songs of the season, as well as some musical surprises.

Karen Mason has starred on Broadway, Off-Broadway, television, and recording and “has few peers when it comes to ripping the roof off with her amazing voice that knows no bounds!” (TheatreScene.net) Karen is a 14-time MAC Award winner and has won the MAC Award for Major Female Vocalist of the Year for six consecutive years. Her highly acclaimed recordings include her newest single, “It’s About Time.” She has also won the 2006 Nightlife Award for Major Female Vocalist and has three Bistro Awards.

Previously on Broadway, she garnered rave reviews starring as The Queen of Hearts in Wonderland, and she originated the role of Tanya in Abba’s Mamma Mia! For her portrayal of Tanya, Ms. Mason was awarded a 2002 Drama Desk nomination as Best Actress. Her other leading roles include Norma Desmond in Sunset Boulevard, which she performed to critical acclaim and standing ovations on Broadway and in Los Angeles for three years; Velma von Tussel in the final Broadway company of Hairspray; “Monotony” singer, Mazeppa in Jerome Robbins’ Broadway; Rosalie in Carnival (another Drama Desk nomination); plus featured roles in Broadway’s Torch Song Trilogy; and Play Me A Country Song. Karen won the Outer Critics Circle Award for her performance in And The World Goes ‘Round, and starred Off-Broadway in her own show Karen Mason Sings Broadway, Beatles and Brian.

Karen has headlined at Carnegie Hall, The Kennedy Center, Lincoln Center, Feinstein’s, Rainbow & Stars, The Algonquin, Arci’s Place, The Supper Club and The Ballroom in NYC; The Plush Room, The Fairmont Hotel, The Orinda in San Francisco; and The Park West, Davenport’s in Chicago.

Her highly acclaimed recordings include “It’s About Time,” her 2009 MAC Award-winning “Right Here/ Right Now,” “The Sweetest of Nights,” the MAC Award-winning “When The Sun Comes Out,” “Christmas! Christmas! Christmas!,” “Better Days,” (including the 1998 Emmy Award-winning song “Hold Me“); and “Not So Simply Broadway.” Karen has been featured on the soundtrack of the original cast CD of Wonderland; Jeffrey (Varese Sarabande), the studio cast recording of Wonderful Town (JAY Records), the original cast album of And The World Goes Round (RCA Victor), The Child In Me, Vol. 1 (Harbinger Records), and Lost in Boston ll (Varese Sarabande).