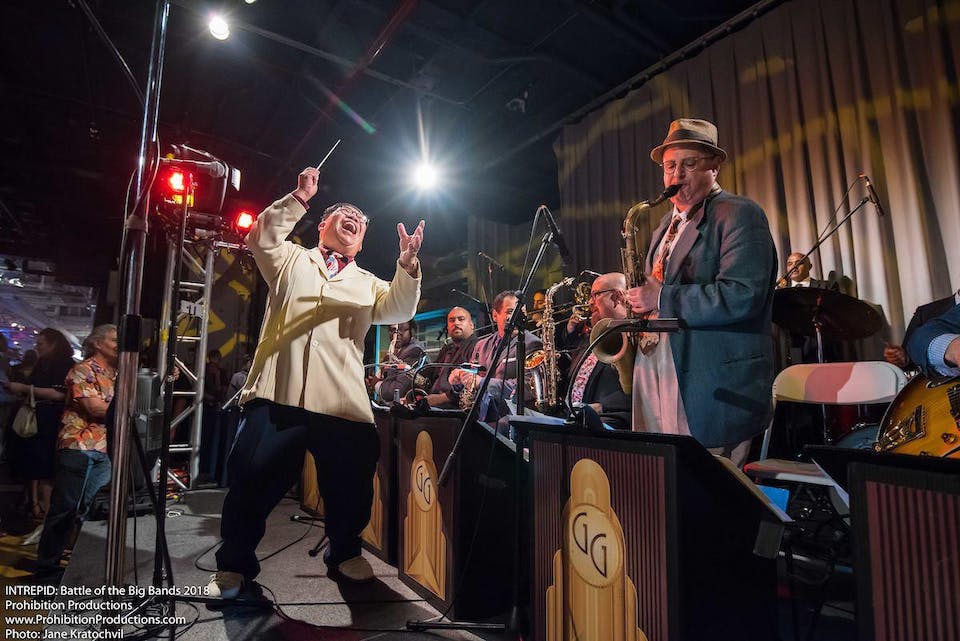 Doors Open at 4:30 - Seating is first come first serve for table AND bar

A native New Yorker, George always loved music. He grew up with rock’n’roll and R&B but in his teens, he also developed a powerful passion for jazz -- especially the big band styles of Count Basie, Duke Ellington, Lionel Hampton, Benny Goodman, Cab Calloway and other legends. At renowned Stuyvesant High School, George played the double bass in the school’s jazz band, where he demonstrated an early flair for showmanship.

This passion continued into his first year at Carnegie Mellon University in Pittsburgh. George created a big band music hour for the school's radio station; off-air, he often spoke of his true long-time dream: leading his own big band. It's easy to imagine this idea would not be readily accepted by college students in the early 1980's, but in fact, George and his show were a huge hit!

The station manager asked George to interview William "Count" Basie before a campus concert in 1979. This inspiring conversation changed George’s life... the very next day, he reached out to fellow jazz players to create a 17-piece big band, which quickly became a darling of the campus community.

After spending a decade in Pittsburgh honing his craft, George returned to his NYC hometown in 2000 just in time to continue his Big Band aspirations. As faith would have it, swing Big Band jazz unexpectedly (to everyone except Gee) became a cultural phenomena sweeping across the country and world! Swing Dancing and Music became the rage among a younger audience and a generation nostalgic for it. With a wink and a nod, bandleader GG held court weekly at New York City (Times Square) swing jazz nightspot SWING46, where two decades later they still dominate the Big Apple Big Band swing scene!