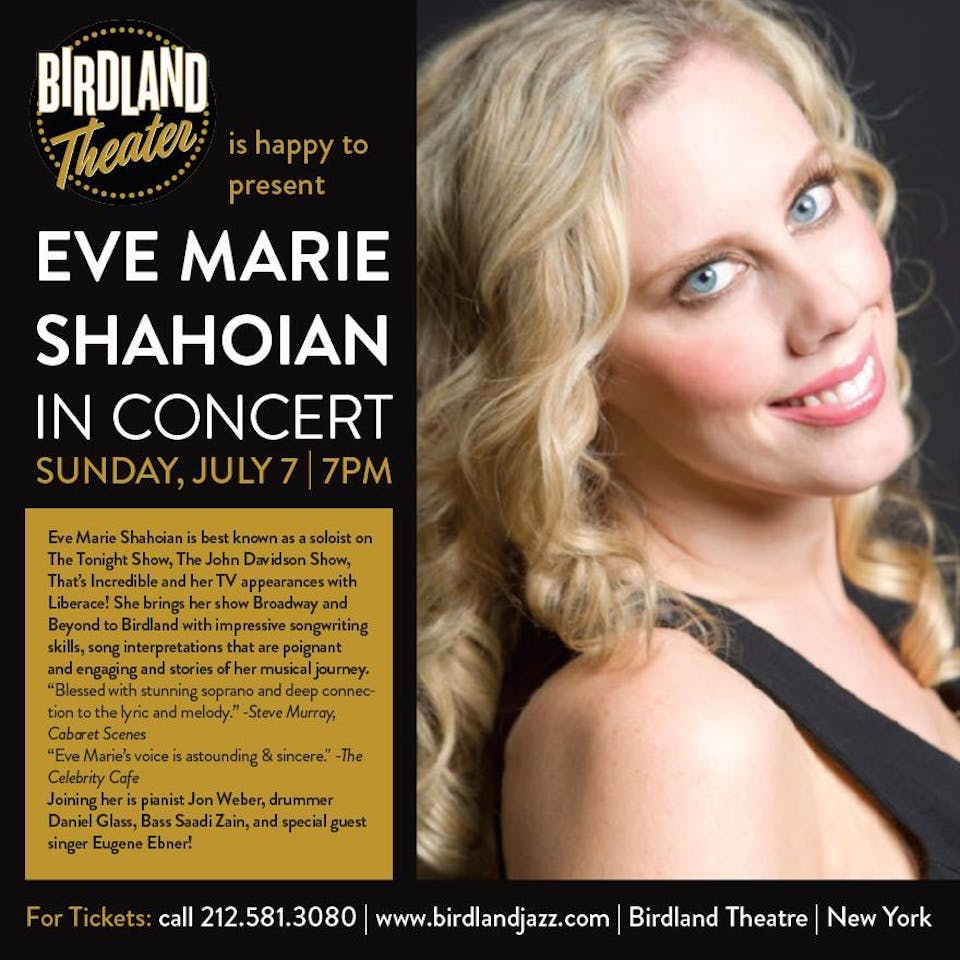 Birdland Theater is happy to announce that singer Eve Marie Shahoian will perform in concert on Sunday, July 7 at 7pm.

Eve Marie is a former National vocal prodigy known for notable guest appearances with luminaries like Johnny Carson, Liberace, Mike Douglas and John Davidson. Join Eve Marie as she presents Broadway and Beyond, music from film, Broadway Shows, the Great American Songbook and original works while interweaving stories of her journey working with Legends. Jon Weber will be musical director.

Eve Marie Shahoian, former National Vocal Prodigy, once referred to as "the pint-sized soprano" is an internationally-recognized award-winning singer/songwriter making her solo debut at the Birdland Theater. A native to the San Francisco Bay Area, Eve Marie is a former NBC “Tonight Show” soloist, known for notable appearances in her youth with John Davidson on both “The John Davidson Show” and appearances on “That's Incredible.” Additional appearances on “The Mike Douglas Show,” “The Merv Griffin Show,” appearances with Roberta Peters, Montserrat Caballe, and live shows at Circle Star in Vegas with mentor, legendary pianist Liberace, and multiple appearances on CBS, ABC, NBC. Eve Marie has performed with major symphony houses throughout the country and Europe with great Maestros Michael Morgan, Calvin Simmons, and Maxim Shostachovich. She has performed at 54 Below, Feinstein's at The Nikko, The Rrazz Room, The Green Room 42, SF Press Club, French Club, Bimbo's 365 Club, Concert Series, Lucca, Italy, and Whitehall Palace in London to name a few. She has been a featured singer on Delta Airlines, and a Billboard recipient for the "Outstanding Original Song" achievement for her first Album "Waiting For You.” In 2017, original music from her EP “Believe” was up for consideration for the Grammy Award in the Best New Artist and Pop Performance Category.