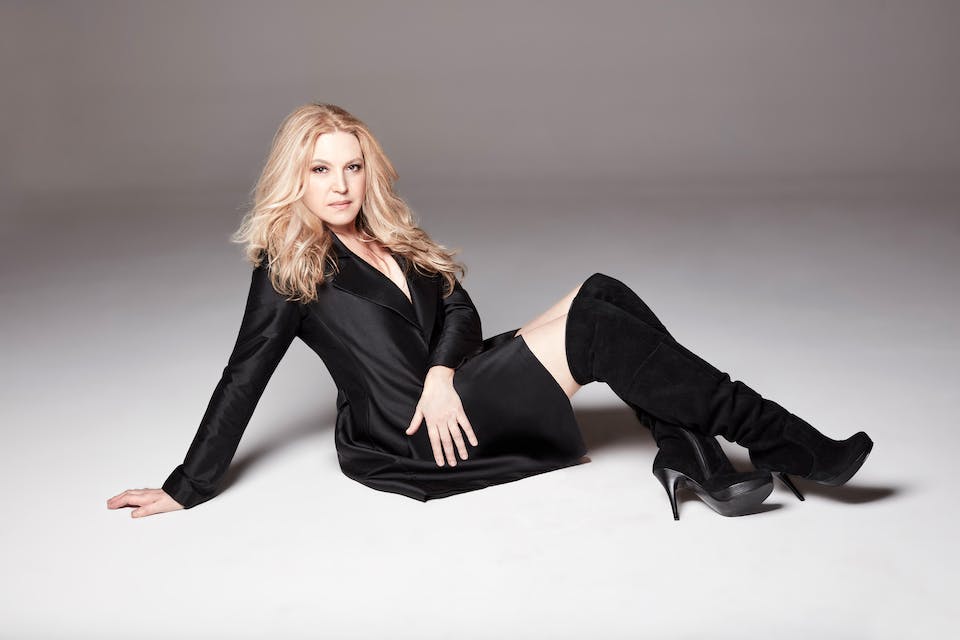 Facebook
Twitter
Email
Birdland welcomes Eliane Elias back to the stage! She will be here September 17th to September 21st with sets at 8:30 and 11pm!

Over the course of a distinguished career spanning nearly 30 albums, multi-GRAMMY®-winning pianist/singer/composer Eliane Elias’ distinctive musical style has emerged as one of the most unique and immediately recognizable sounds in jazz. With over 2.2 million albums sold to date, Elias blends her Brazilian roots and alluring voice with her virtuosic instrumental jazz, classical and compositional skills, while she consistently displays her pianistic mastery and ability to integrate the many artistic roles she takes on.

Elias’ most recent recording, Love Stories, is an orchestral, all-English album to be released on August 30, 2019 via Concord Jazz. “I am very proud of this production and feel it’s one of the most romantic sets of music I’ve ever produced,” she says of the project, which she recorded in Brazil and at London’s Abbey Road Studios alongside co-producers Marc Johnson and Steve Rodby.

She brings a stellar lineup of some of Brazil’s most sought-after rhythm section players, including Marcus Texiera on guitar and Edu Ribeiro, Rafael Barata, Paulo Braga and Celso Almeida on drums, plus Marc Johnson, her longtime musical partner and co-lyricist, on bass. Orchestrator Rob Mathes returns for his fourth recording with Elias here, while composer Roberto Menescal plays guitar on his own song, “O Barquinho/ Little Boat.”

The São Paulo native tapped into a deep well of emotion for this project, which delves into various expressions of love that run the gamut from romantic and dreamy to profound and abiding. Elias’ strong connection to the bossa nova tradition features prominently here, as well, shining through in fresh, modern ways as she interprets several classic works made famous by the likes of Frank Sinatra, Antonio Carlos Jobim plus some of her all-time favorites. Elias also mines her own heart for inspiration on three stunning new original compositions.

The music’s evocative nature reflects an emotionally challenging recent period in Elias’ life during which she wrote and arranged the material. Just four months before the death of her father, she suffered an accident, in which she fractured her shoulder, forcing her to remain almost completely still for many weeks. As she recuperated at home in São Paulo, Elias summoned her creative spirit in response to her challenging circumstances where her writing and her voice became, as Johnson put it, “her focal points for expression.”

As a GRAMMY® Award winner, Latin GRAMMY®-winner, four-time Gold Disc Award recipient and three-time winner of Best Vocal Album in Japan amongst many other awards, Elias has taken her place in the pantheon of music giants. Her three most recent recordings reached the #1 position on the Billboard charts, iTunes, jazz radio charts and Amazon best seller charts to name only a few recent accolades.

Born in São Paulo, Brazil, Elias’ musical talents began to show at an early age. She started studying piano at age seven and at age 12 was transcribing solos from the great jazz masters. By the time she was 15, she was teaching piano and improvisation at one of Brazil’s most prestigious schools of music, CLAM. Her performing career began in Brazil at age 17, working with Brazilian singer/songwriter Toquinho and the great poet Vinicius de Moraes, who was also Antonio Carlos Jobim’s co-writer/lyricist. In 1981, she headed for New York and in 1982 landed a spot in the acclaimed group Steps Ahead. Her first solo album release was a collaboration with Randy Brecker in 1984 entitled Amanda. Shortly thereafter her solo career began, spanning 28 albums to date with the release of Love Stories. In her work, Elias has documented dozens of her own compositions, her outstanding piano playing and arranging and beautiful vocal interpretations. She started winning polls in 1988 when she was voted Best New Talent in Jazziz magazine Critic’s Poll.

Together with Herbie Hancock, she was nominated for a GRAMMY® in the Best Jazz Solo Performance category for her 1995 release Solos and Duets. This recording was hailed by Musician magazine as “a landmark in piano duo history.” In the 1997 DownBeat Readers Poll, her recording The Three Americas was voted Best Jazz Album. Elias was also named in five other categories: Beyond Musician, Best Composer, Jazz Pianist, Female Vocalist and Musician of the Year. Considered one of the great interpreters of Jobim’s music, Elias has recorded two albums solely dedicated to the works of the composer: Plays Jobim and Sings Jobim. Her 1998 release Eliane Elias Sings Jobim won Best Vocal Album in Japan, was the number one record on Japan’s charts for over three months and was awarded Best Brazilian Album in the Jazziz Critics Poll. Both of these albums are a part of Elias’ catalogue of fourteen Blue Note Records recordings.

Moreover, as a testament to the quality of her writing, the renowned Danish Radio Big Band has performed and recorded Elias’ compositions, arranged and conducted by the legendary Bob Brookmeyer. The CD recording of this project, entitled Impulsive, received a GRAMMY® nomination for Best Large Jazz Ensemble Album in 2001.That same year, Calle 54, the highly acclaimed documentary film by Oscar-winning Spanish director Fernando Trueba, featured Elias’ performance of “Samba Triste” and also received a GRAMMY® nomination for Best Latin Jazz Album.

On the Classical Side, recorded in 1993, demonstrated Elias’ classical skills with a program of Bach, Ravel and Villa Lobos. In 2002, Elias recorded with opera sensation Denyce Graves. For this recording, The Lost Days, she arranged two Brazilian classical pieces and wrote an original classical composition especially for Graves titled “Haabiá-Tupi.”

In 2002, Elias signed to the RCA Music Group/Bluebird label and released Kissed by Nature, an album consisting of mostly original compositions. Dreamer, her second recording for the label (released in 2004), was a fresh mix of tunes from the Great American Songbook, Brazilian bossa novas and two new originals, sung in English and Portuguese and supported by a full orchestra. Dreamer received the Gold Disc Award and was voted Best Vocal Album in Japan. It reached number 3 on the pop charts in France and number 4 on the Billboard charts in the U.S. Elias’ Around the City, released on RCA Victor in 2006, merges bits of bossa nova with shades of pop, jazz, Latin and even rock ’n’ roll. Around the City features Elias’ vocals and songwriting in collaborations with producers Andres Levin and Lester Mendez, as well as fresh takes on pop classics such as Tito Puente’s “Oye Como Va” and Bob Marley’s “Jammin’.” Elias returned to Blue Note/EMI in 2007 with Something for You, a tribute to the music of pianist Bill Evans. While touching the essence of the pianist/composer, she also brings her own unique gifts to the surface, as a composer, interpreter, outstanding instrumentalist and beguiling vocalist. This release won Best Vocal Album of the Year and the Gold Disc Award in Japan. This is also the third consecutive recording of Elias to receive these awards and her fourth overall. Something for You reached number 1 on the U.S. Jazz Radio charts, number 8 on Billboard and number 2 on the French jazz charts.

In 2010, Blue Note Records and EMI Japan released Eliane Elias Plays Live, an all-instrumental trio album with bassist Marc Johnson and drummer Joey Baron of a live concert recorded in Amsterdam on May 31, 2002. This performance demonstrates modern jazz trio playing at the highest level and spotlights Elias’ inventiveness and command of the instrument on a collection of jazz standards and one original.

Light My Fire, released May 31, 2011, was the first album she recorded for Concord Records. It featured four compositions by Elias as well as covers of familiar works by songwriters as diverse as Jim Morrison and the Doors, pop icon Stevie Wonder and jazz saxophonist Paul Desmond. Backing Elias was a crew of 12 high-caliber players, including Brazilian icon, guitarist/vocalist Gilberto Gil and trumpeter Randy Brecker. On Light My Fire, Elias wore many hats—as singer, pianist, composer, arranger and producer. In September 2011, her song “What About the Heart (Bate Bate)” was nominated for a Latin GRAMMY® in the category of Best Brazilian Song.

On May 28, 2013, Concord Jazz presented Elias’ I Thought About You (A Tribute to Chet Baker), an album that offered her personalized spin on the work of a key American jazz artist while spotlighting her connection to the singer-instrumentalist tradition.

Long known for her native feel of Brazilian music, I Thought About You truly confirmed Elias’ expertise as an interpreter of American standards. In addition to receiving glowing critical praise,

I Thought About You reached number 1 album in the U.S. and France in sales on Amazon.com, number 2 on iTunes in several countries including the U.S., France and Brazil, number 4 on Billboard’s jazz charts and top jazz radio charts.

Made in Brazil, released on March 31, 2015, on Concord Jazz, brought Elias her first GRAMMY® win in the category of Best Latin Jazz Album in 2016, after seven previous GRAMMY® nominations. In her long career as a solo artist, it results from the first time she’s recorded a disc in her native Brazil since moving to the United States in 1981.

It marked a musical homecoming for Elias. Her following album, Dance of Time, which debuted at number 1 on two Billboard charts, the iTunes Jazz Albums chart and the Amazon.com Brazilian and Latin Jazz charts, was also recorded in Elias’ homeland and took home a Latin GRAMMY® for Best Latin Jazz/Jazz Album.

On April 13, 2018, Elias followed up those wins with the all-instrumental Music from Man of La Mancha, also via Concord Jazz. Featuring nine individualized interpretations of songs composed by the late Mitch Leigh for the legendary 1960s Broadway musical Man of La Mancha, it was a project Elias undertook in 1995 that was waiting for it’s release having been stymied by past contractual issues.

Leigh himself tracked down Elias after hearing her ingenius arrangements of Jobim’s music and commissioned her to arrange and produce the recording. Honored by the offer, she accepted and recruited two different all-star trios -- one featuring bassist Eddie Gomez and drummer Jack DeJohnette and the other Marc Johnson on bass and Satoshi Takeishi on drums, with Manolo Badrena joining on percussion. This album also reached the #1 position on the Billboard Jazz Charts and on iTunes in several countries.

In review of Elias’ unique gifts as a pianist, singer, composer and arranger as well as melding her immense talents in jazz, pop, classical and Brazilian music, the New York Times has described Elias’ live concert as “a celebration of the vitality of a culture overflowing with life and natural beauty” and Jazziz magazine has called her, “a citizen of the world” and “an artist beyond category.”