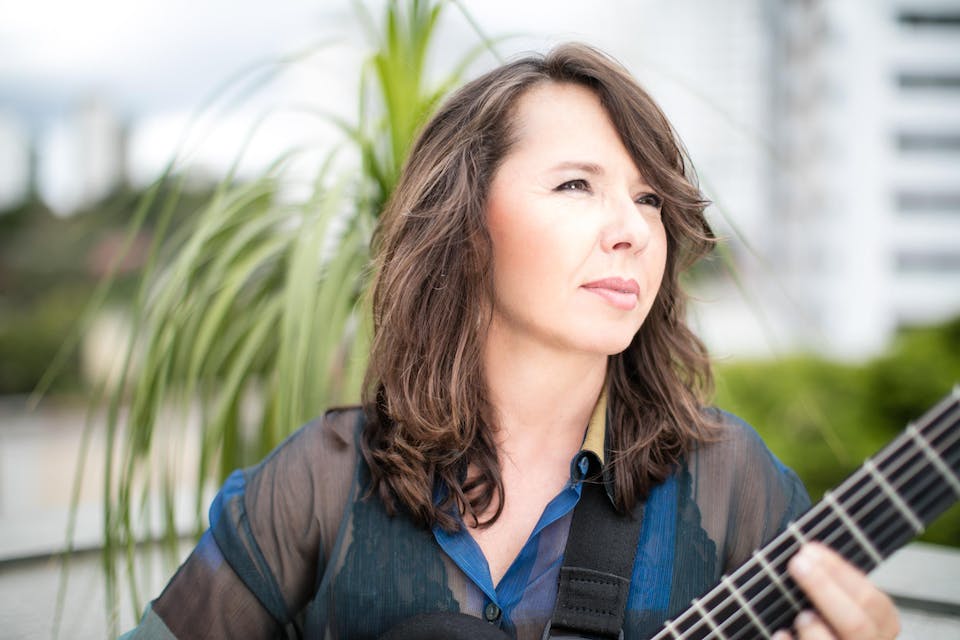 Denise Reis is the acclaimed Brazilian singer, songwriter and guitarist who received a standing ovation by His Holiness the Dalai Lama! She is the “complete artist”, using her talent to promote Brazilian music throughout the world. With an impeccably tuned and colorful voice, Denise covers a broad range of styles, from Popular Brazilian Music (MPB) to World Music and Jazz.

A truly gifted stylist, one of Denise’s unique techniques is her ability to reproduce the sound of a trumpet with her voice! This amazing artistic characteristic, combined with her singing voice and beautiful guitar playing has opened many doors, resulting in several invitations to perform all over the world.

Denise released 2 CDs: Chá de Hortelã com Caviar e Alfândega, both extremely well received by the audience and the critics. In 2007 her international career begun and she performed in countries such as Portugal, Ukraine, Senegal, Venezuela, Slovenia, Israel, Canada and USA.

In 2009 Denise had the honor to be invited by a North American Organization to compose a song in Portuguese and present it live to His Holiness the Dalai Lama, in an event with more than 7.000 people in attendance at the Palace Theater, in Albany (NY).

Since 2014 Denise has taken up residence in New York City where she has regular presentations at well-known venues. With no labels or limiting definitions, it is fair to say that Denise Reis communicates her music in a way that transcends any cultural barrier. Her art is in itself a universal language, in which emotion, technique, perfectionism and sophistication meet each other in harmony.

“Denise Reis sings with a voice of a true veteran singer. Her interpretation is wonderful, colouring and turning even more beautiful any song.

Her vocal cords are never out of tune and her throat is privileged. I could even say: Her throat is magic” – Tito Madi.